We again woke up early in the morning so that we would get on the road as quickly as possible knowing that we had a very long journey ahead of us. Today, we were heading to the Nebbi District. There, we will stay for the next 9 days visiting the sites assigned to us by the Ministry of Health and the CDC-funded Implementing Partner in this region (Infectious Disease Institute or IDI).

Myat Htoo, the HRSA senior advisor to this project, Judy (the pediatric and adolescent HIV physician assistant expert from LA County), Mulamba (the expert HIV case manager and social worker from a FQHC in South Carolina) and myself hopped into the van whose driver was named Katsimi.

We started at 7:30 am anticipating an arrival in Aruya about 5 or 6 pm and we were bracing ourselves for a bumpy ride since we had heard the road conditions would be poor. 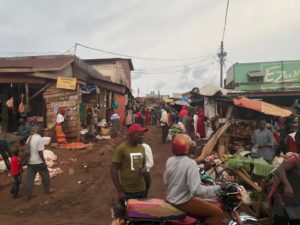 It took a bit of time to get out of Kampala with all the traffic congesting the roads in and out of the city with cars, vans, buses, and most of all with boda bodas. Boda bodas are motorcycles, some official and some not, that are the preferred transportation of many Ugandans. The official boda bodas operate as Uber Bodas—these ones offer their passenger a helmet to wear. Most everyday business seems to occur as much on motorcycles as on foot with Ugandans carrying everything from their babies to purchased merchandise to groceries. I even saw someone transporting a queen bed frame on the motorcycle, taking up several lanes of traffic.

We passed well-to-do houses with curated gardens and half built structures and dilapidated homes with people of all sizes and ages milling about on the sides of the road, kids playing with each other, adults conversing, and men and women entering shops to get their errands done for the day. 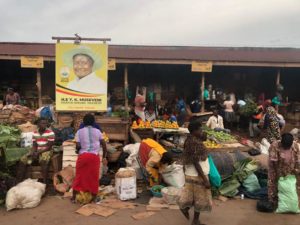 We passed an incredible road side market that went on forever, selling everything from live chickens to bananas, from coal to leather chairs, from vegetables to large decorated steel gates.

But as we continued to leave the city behind, the hustle and bustle of the harried city morning also fell away. We began to notice less people, less road traffic, and beautiful blue open sky.

We are in the wet season yet we have not experienced too much rain at this point. It was very hot and humid. We were happy we were in a van with air conditioning.

As we drove ahead, we began to see more and more lush vegetation sprinkled less and less with brick houses. Instead, we began to see small clusters of traditional huts with a handful of men and women working small plots of land, little kids playing around trees, and goats roaming about. 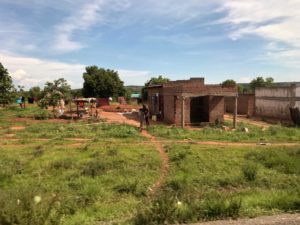 In the towns that we passed, you would know you were driving down their equivalent of “Main Street” when you see simple, sometimes colorful store fronts, usually with a lone man or woman selling their wares. You would see people walking in and out of stores and the street would be filled with music blaring, motorcycles, and fully occupied vans that were their means of public transportation.

We noticed several big factories on the outskirts of various towns nearer to Kampala and for the first 3 hours of the drive, the road was smooth. There was relatively little traffic once we were out of the capital city for which we were grateful.

Our conversations in the car were initially lively, sharing personal stories, experiences and ambitions, and what wonderful books to read. We also discussed strategies on how best to approach the clinic sites over the next week and a half. We were looking forward to meeting with IDI since as the Implementing Partner in the Nebbi District, they would have intimate details about each site and could prepare us better on what we would need to focus on. We want to be as helpful as we can in the short period of time that we will spend with them. Our site visits will likely be anywhere between ½ a day to 2 days at each of the 5 clinics we were slotted to see. We knew that would not be enough time yet we need to make the most of it. We also needed to make sure that we were going to be welcomed as colleagues who have come to share experiences and offer any advice on how they could better achieve their directive– to increase HIV viral suppression rates among their targeted populations (children, adolescents, and men) — without offending them or coming across as the ignorant foreigners stepping in to dictate what they should do. That was the most important piece—we need to be viewed as the allies we are. The challenge is that we had a short period of time in the middle of busy clinics that needed not to be interrupted. 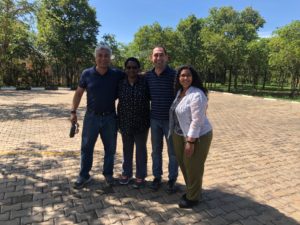 We were met by Daniel, the CDC lead for the Nebbi region, at our designated meeting place 3 hours into the trip. Daniel had to travel from Kampala in a CDC assigned car and could not travel with us. Similarly, we could not travel in the CDC car though Myat Htoo could have since he worked for HRSA. Rules and regulations of bureaucracy present themselves in head scratching ways sometimes.

We were told this is likely the only place we should eat at between here and our final destination. It was a lovely compound and the meal was delicious. We sat in the garden among yellow birds flitting and flying between trees, chirping away. Daniel arrived and over lunch we began our discussion about our strategy. Unfortunately, it turned out that we were not going to meet with the IDI lead for the region until the next morning.

Now, with our stomachs full, we climbed back into the van, relaxed, thinking that the road will continue to be as smooth as it had been so far. Of course, that turned out not to be the case. 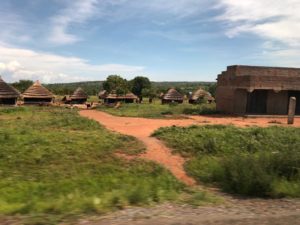 The roads became bumpier—though I don’t think it ever reached the level that we had been told to expect. And we began to encounter some of the buses that we were warned about, no actually made fearful of, by the Head of Security at the U.S. Embassy whose role was to come speak to us for 30 minutes and scare us about everything that could go wrong in Uganda from locals snatching phones out of our hands to hotel employees stealing our computers (he explicitly told us to carry our phones and computers with us at all times at which point we all looked at each other incredulously since they explicitly told us NOT to bring our phones and computers to the embassy because they were unauthorized) to us finding ourselves injured and bleeding on the roads because of crazy drivers to us catching malaria or Ebola or Zika or Marburg viruses or any combination of the above.

These buses sped right passed us on this small two way road and as they left us in the dust, we noticed big letters written on the back tire flaps that read SAFETY FIRST. Our van would shake and it did not help that in Uganda, as a former British colony, they drive on the opposite side of the road as we do in the U.S. which made their whizzing by us more surprising and discombobulating. 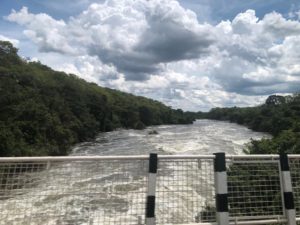 Soon after lunch and our getting back on the road, the air conditioning in the van started to heat up. We had to turn it off and crack open the van windows which were the type of windows that opened only a little from the back. As we overheated, we became more tired and the conversation came to a lull as we all nodded off and came awake according to our own dysfunctional biorhythms.

Nevertheless, in between the uncomfortable short naps, we were able to take in the openness of Uganda, the vast sky above and the greenery below. At one point, as we drove through a national park, we spotted baboons, an antelope, a gazelle, an elephant, and some hippos. We all agreed that was a very sweet compensation for enduring this very long journey to the northwest of the country bordering the Congo.

After a total of 10 and a half hours on the road, we finally made it to Aruya where we are staying—the U.S. Embass 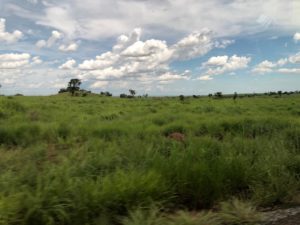 y did not approve any hotels for us to stay in Nebbi (too small and too rural). So we are staying in the neighboring district about an hour away from many of the sites that we will be visiting. When we got to the hotel, we were exhausted and hungry. We checked in and went to our rooms. How quickly we became aware of the lack of simple luxuries we all have become used to despite the whole Nebbi team having experienced many years living in the developing world. Though disappointment was evident on all of our faces (we were told that the better hotel they tried to book for us was completely full for the next two weeks), we each put a brave face on for the other, muttering a few funny anecdotes of the few minutes we each spent in our rooms prior to leaving for dinner—the mosquito net around the bed that did not cover the perimeter of the bed and had holes in it; the nonexistent hot water in the shower and the pail provided to help us bathe; the lack of air conditioning and the noise of the fan that sounded like a ship coming into the harbor; the lack of a dresser and a simple wardrobe with no hangers deeming it useless; and the presence of Wifi but the inability to connect in any meaningful way given the electricity was only intermittently available.

At dinner (ironically, it turned out we were taken to dinner at the hotel that we would have stayed at if it was not full—yes, apparently, the rooms have air conditioning and the hotel has a generator that works seamlessly), we had a great conversation with Daniel and each other about the coming days, a productive and jovial discussion punctuated with much cheer and laughter as we snubbed our noses at our circumstance, not letting anything get in the way of our exhilarating mission these coming days.