With spring upon us and April starting in just over a week, it’s hard to imagine that the first wave of “Open Enrollment” for the Affordable Care Act is coming to an end. The term “open enrollment” refers to the period of time during which individuals who are eligible to enroll in a Qualified Health Plan, can enroll in a plan in the Marketplace. For coverage starting in 2014, the Open Enrollment Period is October 1, 2013–March 31, 2014. So, with that said, the reality is people have exactly one week to “get covered” and officially register for health insurance during 2014. After March 31st, the next available chance to enroll will be in November which will not ensure active health coverage until 2015. Here at the Community Health Center, Inc., we’re eager to announce the Open Enrollment Homestretch and to share 5 simple, yet informative ways to get educated and involved as the ACA moves forward and the deadline rapidly approaches.

1. Check out Shannon Bali on NBC Connecticut. Shannon is one of three certified applications’ counselors at CHC who have been enrolling uninsured patients across the state since October 1, 2013. Please watch, like, and share this video; it highlights a story of someone who decided to take action and enroll with Shannon in the CT Health Insurance Marketplace before the deadline on March 31st. https://www.youtube.com/watch?feature=player_detailpage&v=-2nG-_na07I

2. Participate in the “GET COVERED CT” Thunderclap, the new wave of social media that allows people to share a common message at the same time, automatically to amplify the impact of the message. Thunderclap is the first-ever crowdspeaking platform that helps people be heard by saying something together. It allows a single message to be mass-shared, flash mob-style, so it rises above the noise of your social networks. This theme is “Get Covered CT” with the message ““Friends don’t let friends (or family) go without coverage. Enroll by March 31st  #GETCOVEREDCT                http://thndr.it/1d00Zdp” Go check it out!https://www.thunderclap.it/projects/9808-get-covered-connecticut

3. #EnrollCT–>Participate in the Twitter Townhall with Kevin Counihan, CEO of Access Health CT. (Connecticut’s insurance marketplace) Tomorrow, March 3/25, from 2-3pm, there is a tweetchat with an open invitation for anyone to participate with @HealthJusticeCT . This virtual discussion on twitter is to remind friends and family about the March 31st healthcare enrollment deadline. Kevin Counihan from @AccessHealthCT will join us and take questions about healthcare enrollment in Connecticut. Use hashtag #enrollCT to send questions and comments in advance. Please join! http://twtvite.com/8kitnw3mw8ry3x2

4. Cast your vote: Watch CHC’s entry to the Health Justice CT’s Video Challenge, “We Know what You’re Thinking”. http://www.healthjusticectchallenge.org/we-know-what-youre-thinking-entry/ This is the 3rd video challenge that was hosted by Health Justice CT. The overall theme was focused on Healthcare Enrollment to promote a healthier Connecticut for all! 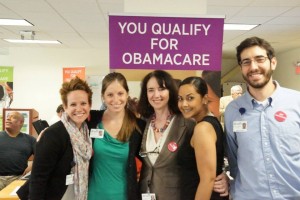