Below, you’ll find the post-event press release from the first annual CHC Meriden 5k: Race for Mental Health. Photographs from the event can be found on our Facebook page! 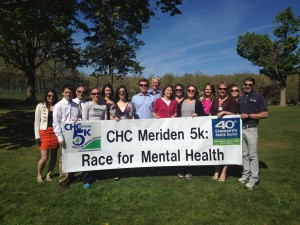 Thousands Raised for Improvement of Mental Health Care in Connecticut

Meriden, CT (May 20th, 2013): On the morning of Saturday, May 11th, 2013, hundreds got together at Hubbard Park in Meriden, Connecticut to exercise for a great cause. The event – titled the CHC Meriden 5k: Race for Mental Health – was presented by the Community Health Center, Inc. and sponsored by nine local business and organizations including lead sponsor Anthem Blue Cross and Blue Shield. Those in attendance persevered through inclement weather, with just under 150 finishers between the 5k run, Health Walk, and Superhero-themed Kids Fun Run. In the end, over $5,000 was raised to improve mental health care in Connecticut.

According to the National Institute of Mental Health (NIMH), about 1 in every 4 adults (26%) suffers from a diagnosable mental disorder in a given year. This number – which is estimated at 58 million people aged eighteen and older – makes mental disorders the number one type of disability in the United States.

May is Mental Health Awareness Month, and the week leading up to the event was Children’s Mental Health Awareness Week, making the event incredibly relevant at a time when both state and national efforts are being made to address mental health, the stigmas attached to it, and improving the quality of treatment that is being delivered by caregivers. One-hundred percent of the proceeds are being distributed by the United Way of Meriden and Wallingford to local organizations dedicated to mental health care. The planning committee for the event was recognized at the recent United Way Annual Awards Ceremony, a nice achievement after the positive impact the CHC Meriden 5k: Race for Mental Health has already had in the community.

Following all of the physical events, an awards ceremony took place to honor the top male and female overall finishers in addition to the three fastest competitors in each age category. Spiderman was in attendance and cheered the Kids Fun Run participants through their half-mile race, with face painting and superhero cape decorations also available for children on hand. A considerable number of volunteers allowed the CHC Meriden 5k: Race for Mental Health to run smoothly throughout and a great time was had by all. The event is poised to become an annual occurrence in the greater Meriden community, with excitement already generated for next year’s race.

“The CHC Meriden 5K: Race for Mental Health was a collaboration where the partners worked to raise funds for an issue larger than themselves…community awareness and care for mental health,” said James J. Ieronimo, Executive Director of the United Way of Meriden and Wallingford. “Programs to provide mental health first aid training as well as family support will be funded to benefit not simply the professionals who work in the field but also the individuals and families who need their help.”

Meriden Mayor Mike Rohde had this to say about the event: “The first CHC 5k Race was a great success. This was an extraordinary effort by race organizers who collaborated to make this event truly memorable and awesome. CHC has set a high bar for next year!”

Race results can be found online at http://startlineraceservices.com/results.htm.