This post is an email from Kasey Harding-Wheeler, who is our Director of HIV Service:

Thank you so much to everyone who attended or helped plan World AIDS Day. It was a moving tribute to the people we have lost to HIV/AIDS, those living with HIV and the providers and staff who care for them on a daily basis. With HIV funding in such a precarious state right now it is incredibly important that we keep HIV/AIDS and the need for funding and resources on the minds of people in positions of leadership. Fifty people holding a homemade sheet/sign, carrying candles and marching down Main Street in Middletown did just that! It also sent an important message to the many people living with HIV/AIDS that we have not given up the fight!

The World AIDS Day celebration came on the heels of our latest Community Health Center routine HIV testing numbers which indicated that our providers are screening 67% of patients between the ages of 13 and 64 for HIV testing. This is substantially higher than last year. In addition, the number of patients receiving an HIV test this year at CHC was 65% higher than last year! We did over 16,000 routine HIV tests so far this year!  CHC’s screening and testing numbers are a testament to our commitment to HIV prevention, testing and care! Tuesday would be Ryan White’s 40th birthday and I can think of no better tribute to his legacy of compassion and care than the work that everyone does at CHC to ensure optimal care for all patients and specifically people living with HIV/AIDS. 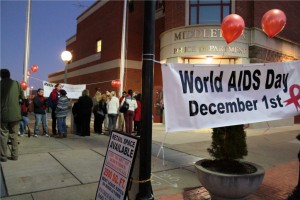