Different people respond to emergencies in different ways.  This was driven home to me yesterday when I visited the emergency shelter in Middletown, CT for people that have lost power due to the October snow storm.

On the way, I passed a gas station where the price had gone up five cents from the day of the snowstorm.  It seemed like someone was asking, “how can I profit from the power outage?”

Other people had medications that needed to be refrigerated and were destroyed during the beginning of the power outage.  Medical staff helped these people get replacement prescriptions.

Some people, especially those from whom normal life is a daily struggle had difficulty adapting to their new situation.  Fortunately, behavioral health staff from CHC’s School Based Health Clinics were on hand to help some of them.   “If you were home, what would you do?” they asked in an effort to help people reframe their views about their current situation.

Yet perhaps one of the most important reframing tools they used as a simple tool we too often take for granted, or forget to use, a kind smile. 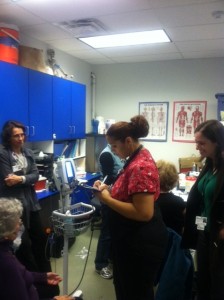 Staff members were asked, “How did you get to be so nice?  You must have power at home.”  However, many CHC staff continue to do great work despite having no power at home.  Instead, they have something else that matters more.

Instead of asking the question, “How can I profit?” or “How can I get by?” they are asking, “How can I help?”  Perhaps having an attitude of trying to help those around us is one of the most important coping tools we have.