After an exhilarating and exhausting week, the work continued. We finished up the written daily debriefs of last week’s site visits and discussed and deliberated as a team what recommendations we were going to make moving forward. 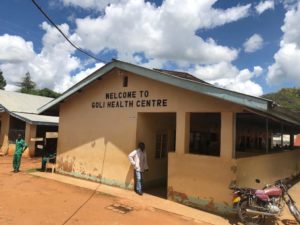 Then, Monday arrived and with it, the first of the last two site visits in the field: Goli.

Goli Health Center is a Protestant-based, private health center serving a large catchment area right at the border of the Democratic Republic of the Congo (DRC). They estimate 40% of their patients cross the border to receive care in Uganda since there are very few, if any, facilities on the Congolese side. This time the journey to the site took us up a mountain on rocky dirt roads. The small villages along the way seemed well organized and well-kept. Each village seemed to have a concentration of sturdy-looking thatched roof huts with a completed brick building or two. The majority of the brick buildings we have been seeing in our journeys have been unfinished; not so much here. 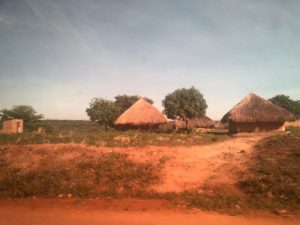 A number of villagers could be seen walking along the road, tending to the crops, or selling fruit or gravel or coal. We guessed the majority of the villagers were down the hill beyond our sight as the land slid into a green valley that stretched down beyond the huts only to resurface at the edge of the horizon touching the expansive sky which, today, was heavily populated with dark clouds of enormous shapes and intricate patterns. We had not seen too much rain as of yet despite it being the wet season. The downpour, however, held out until we sat down in the garden for dinner at our usual restaurant in Arua that night.

As we approached the health center compound, we were told that the hill just over the valley was now the indistinguishable land of the Congo. If we wanted, we could have easily hiked through the valley and up the other side that afternoon. 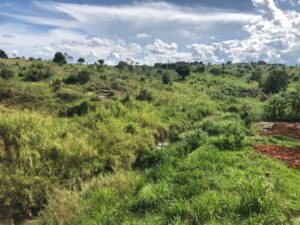 It was that simple. In fact, we were driven to the official border crossing after the end of the visit to demonstrate to us how close and how easy it was for people to enter Uganda. The traffic was mainly by foot across the border and other than for missionaries entering the Congo, the direction of flow was one way into Uganda. There was a small table set up at the side of the road that had a sign alerting all people coming in of the need to be screened for Ebola. Hands needed to be washed with chlorinated water and shoes/feet needed to be dipped in a bucket I assume was also chlorinated.

Goli was a level 4 health center, one level below a hospital, but they were working on getting that distinction in the very near future. 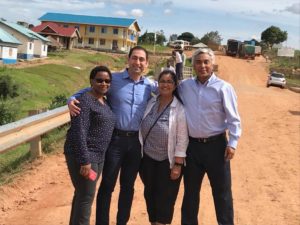 The head administrator was a woman from South Korea whom the church had placed here 15 years ago as a temporary replacement for her predecessor who had taken ill and had to return to the Korean peninsula. We met with the health center staff in the building that housed the ART (Anti-Retroviral Therapy) clinic. As with all the sites we visited, the ART clinics were distinct sections of the facilities where the people living with HIV would go for care. Many of the U.S. clinics serving the HIV population early on in the epidemic had also been identifiable as HIV clinics as they currently are in Uganda. Most of the care in the U.S. has now moved to an integrated model, driven in part for this reason. The stigma and discrimination in Uganda surrounding HIV are major barriers to accessing effective care. Of course, stigma and discrimination persist as barriers in the U.S as they do in the rest of the world. Many of the patients decide to receive care in Ugandan districts other than their own, preferring to travel long distances so as to not be seen at their local centers. Majority of patients rely on their own two feet to get to their destinations or wait until they can find some means of transportation which can take a very long time to procure. I continue to be astounded at the distances patients travel, many while they are ill, to get the healthcare they need. 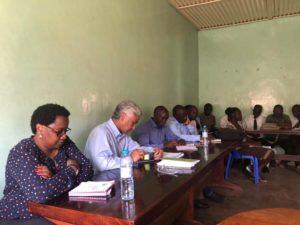 The time it takes to walk there and back, not to mention the time spent waiting to receive care at the facility, can take up the whole day. These are impoverished areas and people are living day to day depending on the mangos or bananas or other wares they are able to get their hands on to sell to provide for their families. An appointment with the clinical provider may mean their family may go hungry that day. Imagine making such choices. You can understand then why someone may decide to forego coming to their clinic appointment.

Each site visit reinforced the similarities much more than the differences between each other and between our clinics back home in the U.S. That was the most surprising, I would say. The stark differences are easy to point out—the abject poverty seen among the patients, the state of the facility infrastructure, the lack of technology (no electronic medical records; no internet connectivity). Two of us had to use the washroom at the end of our visit in Goli and we were directed to outside latrines of which I will only say that was likely one of the most challenging experiences I have had to get through.

The similarities, though at first may have been hard to see, fundamentally became more obvious as we delved into the details with staff members of these facilities. While we in the U.S. have resources and amenities that these resilient, determined health workers can only dream of, the issues they are struggling with now, some we struggled with in the past and have worked hard on successfully overcoming, many we continue to strive to resolve in our own clinics: issues of poverty (which are profoundly real but not as glaring perhaps as in Uganda), transportation, overstretched healthcare workers, clinic wait times, missed appointments, adherence issues, need for data driven care, inadequate clinical training, insufficient ongoing mentorship and guidance, and ongoing stigma and discrimination. You get the idea. 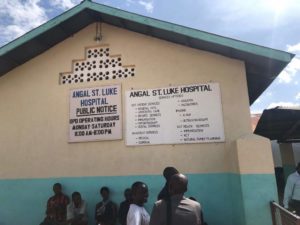 And as we were troubleshooting and discussing ways the facilities could address these challenges, we were continuously thinking, as we confessed to each other later, “We should be doing the same things when we get back to our health centers!”

The last site we visited, Angal St. Luke Hospital, covered the largest catchment area of all the health centers we attended. As with all the others, we had to travel a ways along the dirt roads to get to it. The drives to each of the sites tacked on at least 4 extra hours to our day which was beginning to take its toll on all of us. Yet, because of the time spent together in the van, we quickly got to know each other and each other’s families really well. It is incredible how humor and commiseration can strengthen the bonds of friendship.

As we approached, it was immediately evident that this hospital compound was the busiest, with patients lining up along walls and hallways waiting to be seen. It was also obvious that it was the health center that had more resources available to it than any of the others. Being a Catholic-based private facility, that did not come as a surprise. At this point as we finally arrived at our fifth and final site, I think the whole team was mentally, physically, and emotionally exhausted. As we began the usual meet and greet, I was worried since the usual gathering of staff was not present. It seemed that they were not aware that we were coming today. Within half an hour, everyone began to trickle in as we interrupted their morning’s work. We promised we would try to be as quick as possible. 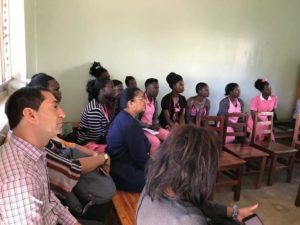 As we proceeded with the site visit, we broke out into our usual three groups: adult/pediatric clinical team, team caring for pregnant and breastfeeding women, and those involved in outreach and community linkages. Throughout the next few hours as our paths crossed, we would catch the eye of the other team member and we could see that we were having similar encouraging experiences across the board: we had twinkles in our eyes and smiles on our faces. Much needed to be done but much had already been accomplished.

For me in particular, I had the chance and the privilege to accompany the nurse clinical assistant as he saw patients in the ART clinic. Up until now at the other facilities, we had met with the staff on days the ART clinics were not being held or we arrived when the clinic was over— that may have been set up deliberately by the organizers or it just happened by coincidence. 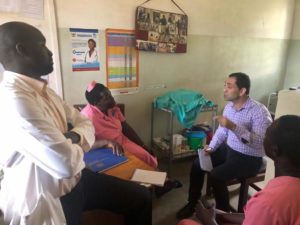 We did encounter patients at the clinics, of course, but they were cursory meetings as we said hello to each other and exchanged smiles and attempts at quick pleasantries.

Being able to meet and converse with patients more intimately, however, was the exhilarating and inspiring reminder I needed as the excitement of a new adventure was wearing off and the exhaustion of a grueling schedule was setting in. Seeing the patients, in tattered clothes and worn out slippers, gaunt, gracious, and warm; hearing about their lives, their struggles, their joys, and their heartbreaks; observing the genuine gratitude on their faces; seeing the beautiful babies hanging on to their mothers any which way they can, laughing, crying, naïve to the hardships they will be facing as they grow, made what we were trying to do here clear and critical. There is a true potential with this project to improve in significant ways the trajectory of lives of so many people born into circumstances beyond their power. If there is even a small chance to make a difference, the only choice is to try.