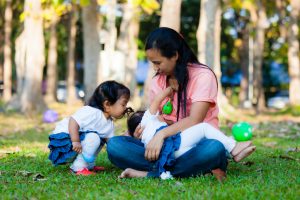 Every mom and every baby is unique. Every mothering experience will be different. But if there is one thing that every new mom can expect, it’s lots of advice. From well-meaning strangers to mommy blogs to grandma, the endless parade of tips and opinions starts at the “we’re trying for a baby” stage and lasts all the way through the “what college to choose” stage. Breastfeeding is no exception.

“All the politics around breastfeeding – it’s a politically fraught field, from the professional end to the mother end to the workforce end,” says Amy Gagliardi, who oversees maternity services at CHC. “There’s so many politics involved in something that should just be a natural occurrence. We make milk, we have children.”

She smiles. “But I just help where I can, and we make a difference!”

August 1-7 is World Breastfeeding Week, and August is Breastfeeding Awareness Month. As Amy says, breastfeeding – though a natural part of the pregnancy cycle – is not always straightforward or easy. And there’s a lot of information (and opinions) out there about it. So what’s the secret? Simple: there’s no one secret for everyone.

“I never feel like everyone has to breastfeed. Everyone has to do what they want to do, what’s right for their body, for their family, for where they are in their life right then,” Amy says.

For moms who do choose to breastfeed, though, lactation consultants like Amy are there to help. Three sites at CHC (Middletown, Meriden, and Clinton) offer prenatal services. In addition to the lactation consultants and general pregnancy care, there are dieticians, nurse care coordinators, chiropractors, and childbirth classes (which are open to the public). This integrated team keeps our new moms and moms-to-be healthy.

As an International Board Certified Lactation Consultant, Amy has clinical credentials that allow her to not only help coach a mother through breastfeeding, but diagnose what is causing the baby to not feed well.

The American Academy of Pediatrics recommends women exclusively breastfeed their children for the first six months, introduce solid food at six months, and try to continue breastfeeding for as long as possible up to two years.

“People will say, well, how long should I breastfeed?” Amy says. “I’ll give them the [American Academy of Pediatrics] statement, and then I’ll say, but let’s just make it through the first two weeks and then we’ll go from there.”

Breastfeeding has a lot of benefits for both mom and baby. From added nutrition to the bonding experience to cost savings, breastfeeding is often a really good choice for moms. Breast milk changes as the baby grows. In the days right after birth, moms produce the very nutrient-rich colostrum (sometimes called “liquid gold,” because of how healthy it is). That changes to breast milk after those first few days, and the breast milk continues to change as the baby grows to provide the baby with the right amounts of fat, sugar, water, and protein.

But all of that doesn’t mean that it’s going to come easy right away! A lot of women have trouble, especially in the first two weeks.

“The first two weeks are when most women in America stop breastfeeding,” Amy says. “The babies aren’t on a regular schedule. And some of the moms, they have hormone changes and exhaustion during the first two weeks, so they’re pretty vulnerable to feeling not confident.”

The important thing is just to keep trying.

“Expect to lose your confidence those first couple of weeks! But that’s ok. You can do it.” 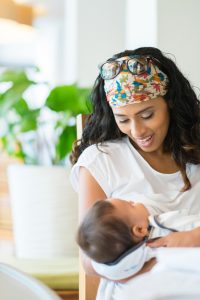 The way we understand breastfeeding has changed a lot in the last few decades. Where formula used to be thought of as more healthy for the baby, we now know that breast milk has a lot of advantages over formula. But that doesn’t mean that formula is bad! Every mom has to make the right decision for her, without judgment from others in her life. Support systems like Amy, partners, friends, and family, are very important for new moms.

“I think the biggest thing is that in America, when we think of newborn babies, we think, ‘I want to give the baby a bottle!’ We conflate bottles with nurturance and people think that if you’re breastfeeding there’s nothing they can do to help and be a part of the experience. So I explain all the things they can do – which is everything except for breastfeeding!” Amy says. “In the beginning, we tell them, your role is really to hold the baby, talk to the baby, feed the mother so that she can feed the baby – it’s really to enhance their importance and to let them know how much a baby and new mother needs.

“We let them know that studies tell us that if a woman has someone close to her in her social network who is supportive of her breastfeeding, it’ll increase her likelihood to breastfeed successfully.”

To learn more about breastfeeding, head to WorldBreastfeedingWeek.org or The American Academy of Pediatrics.