Vegetables dry out when they hit the heat without a little oil. Before they hit the grill, toss them with a light coating of oil. Don’t use too much—it not only adds unnecessary calories, but dripping oil causes flare-ups and off flavors.

Some vegetables take a minute or two to cook and others take longer. Denser vegetables like potatoes will take the longest to cook. Keeping them over too high a heat for too long will char them on the outside while keeping them raw on the inside. To prevent burning, sear vegetables over high heat, then move them to a cooler part of the grill to finish cooking. Or precook them and just give them a few minutes on the grill to get some color on the outside. 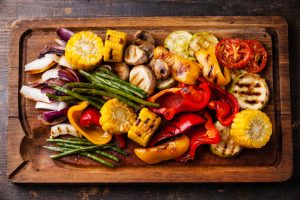 To keep smaller vegetables like cherry tomatoes from rolling around and falling though the grate, put them on a skewer or use a grill basket. If you don’t have a grill basket, fold a 24-inch-long piece of heavy-duty foil in half and crimp up the edges to create a lip; this “basket” will prevent the food from falling through.

How you prep your vegetables dictates how they will cook. Cut them into smaller pieces if you want your vegetables to cook more quickly (and use a skewer to keep the on the grill). Cut round vegetables like onions or eggplant into thin “rounds”—you’ll get more surface area, which allows for a crispier outside, and because they’re thin, they’ll cook quickly.

Don’t feel like babysitting your vegetables on the grill? Try cooking them in packets instead. This method works great for dense vegetables like potatoes, sweet potatoes or other roots. Simply place a 24-inch-long piece of foil on the counter and lightly coat with nonstick cooking spray. Arrange thinly sliced vegetables a single layer, slightly overlapping, on the foil. Leave a 2-inch border on all sides. Fold foil over and pinch the edges together, making a packet. Place the packet on the grill. Cover the grill and cook until the vegetables are tender (about 12 to 15 minutes, for potatoes). When you open a packet to check doneness, be careful of steam.

These tips are from eatingwell.com.