The Garden Club of Middletown collaborates each year with the MARC Community Resource, Inc. The Middletown Club and MARC joined forces to maintain six different plots from May to September.  Every Tuesday for the past several months in the afternoon fourteen to twenty members meet at the CHC Main building to be whisked away to the rooftop garden. This year they planted sunflowers, tomatoes, green beans, carrots, and much more for their rooftop dinners and St. Vincent DePaul. Although many of their plants have survived the summer some were less fortunate, but for their dinner they used many of the in season vegetables and fruits. They were also able to donated over thirty pounds of fruits and vegetables to Vincent DePaul on Main Street. 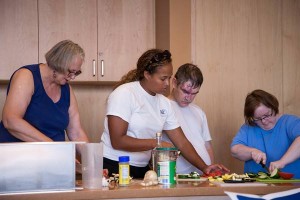 For their dinner they paired a mix of salads and pan seared vegetables with spaghetti. The MARC Group and Garden Club members cooked together and set their places in the Community Room. For dessert they had a peach cobbler with ice cream. Mary, one of the MARC members made a delicious bun cake for everyone. As the dinner wound d own they packed up their things and discussed that the next stages of the garden will be keeping up with the weeding, watering, and donating as much as they can until it’s time to turn over the soil for fall.