“Passing sweet hours, immortal and mystic hours with you dearest

Vigil of silence, love and death, vigil for you my son and my

Thousands gathered around Main Street Middletown, past Monday morning to honor soldiers past and present. For a day of solidarity and remembrance as a country, Community Health Center, Inc. (CHC) employees and AmeriCorps volunteers gathered to march in the parade specifically to honor The Gold Star Families, an organization that provides support and outreach for families who have lost service members while on active duty.

CHC’s AmeriCorps volunteers and facilities team designed a float that featured a life-sized shadow of a family and the American flag waving in the background. Red, white, and yellow flowers showcased four gold stars to symbolize respect for all branches of military service. As the float made its way down Main Street, starting at St. John’s Square and ending at Union Street, CHC marchers distributed flower seed packets to spectators.

One such mother dressed all in white lost her son early in the Iraq war. She spoke of feeling overwhelmed by the patriotism shown on Monday. She also expressed gratitude to a young boy dressed in a military outfit. Complimenting his show of patriotism for his age. While expressing sorrow for their personal loss they held a strong sense of pride knowing their children were a part of something greater than themselves. The moving display was caped by The Council of Veterans that gave a final salute – playing the radio signal distress call followed by static indicating a fallen solider. Against the backdrop of the American flag it was the paginate tribute for the ultimate sacrifice for flag and country. 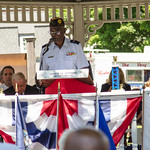 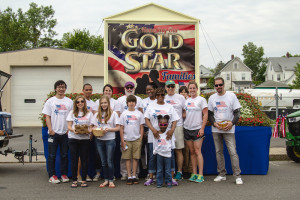 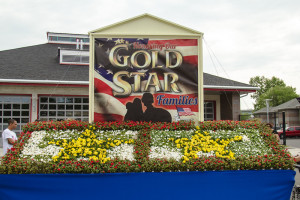