“Caring for our veterans; Their right, our privilege.” Every year the City of Middletown hosts a Memorial Day parade that honors the federal holiday of remembering the men and women who died while serving within a military service. The parade travels through the historic downtown Main Street area. Many community organizations, businesses, city leaders and Veterans walk the parade with thousands of people lined up on either side of the street to watch, cheer and honor the efforts. CHC is always proud to participate and each year the AmeriCorps members plan and participate with the float and walking banner. Below is a photo of this year’s CHC team right before the parade began along with Dr. Margaret Flinter, our Senior VP & Clinical director. This year’s theme focused on Disabled Veterans so we chose the line “honoring our veterans of all abilities”. 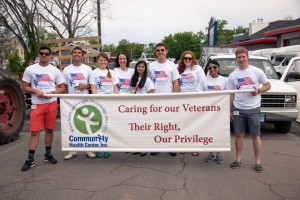 The memorial day parade float is built every year by Senior Facilities Tech, Walter Squier. Walt is very talented and supports many projects here at CHC. He also drives the trailer in the parade and it is a known fact that without Walt, the parade float would never happen. Due to Walt’s creativity and attention to detail, he arranges many flowers every year on the float to resemble a design. This year he worked his magic to create an American flag pattern which helped CHC win an award that recognized the beautiful float design. Walt has helped win this award before, he is truly a special member of the CHC staff. See below for a photo of the float design and Walter towing the trailer this past Monday, May 26th. 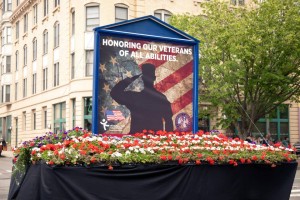 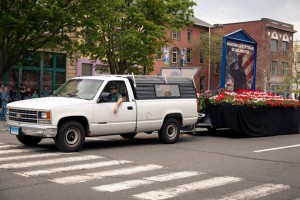 Another group of individuals that helped make this a great Memorial Day for the Middletown community are the HealthCorps members. They marched and handed out seed packets while representing the health center. Sayali Ghatpande, a member who serves within the Early Detection program and also played a huge role in organizing CHC’s efforts this year shared some memories from the day.

“Before the parade started, a woman came up to us to say that the float looked wonderful with all the flowers. There were so many cheering spectators eager for seeds to start their own gardens that we actually ran out of seed giveaways by the time we were half-way down main street!Even before the mayor arrived to speak there was a crowd of excited people waiting. Some spectators remarked that the seeds were a thoughtful giveaway, they were especially excited about planting sunflowers and carrots! As I was driving down to Pease Ave to wait with the rest of the AmeriCorps, Margaret, and Walt so many spectators had already camped out, with folding chairs, iced teas, and smiling faces.” 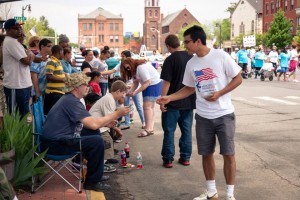 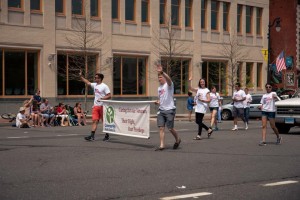 We cannot fully express our gratitude to all members of any military service, past and present for sacrificing their freedom on behalf of ours but continue to honor their courage and selflessness through service to the underserved.