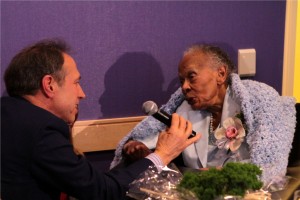 Tonight, I write with great sadness to say that Reba Moses, one of CHC’s founders, died this evening.  Just a week ago, she entered the hospice at Middlesex and family and friends gathered round.  We sat and talked and held her hand, and though Reba was weak, she was all there as we remembered the times we had shared and the work she had done.  Last night, she had made the decision to return to Middlesex Convalescent Center where she has lived for many years, and there, at home, she passed away.

It is no exaggeration to say that there would be no Community Health Center if Reba had not believed in the right and duty of each of us to create the change we need in our own community.  She grounded us in the early days of CHC, at the same time inspiring us to make the health center into a place that would always strive to be better.  Along with Gerry Weitzman, as a founding board member of CHC, she believed that though we were young and inexperienced, we were right to believe that Health Care is a Right, Not a Privilege.  When, after our first 15 years, we were able to create a dedicated program to support the mental health of children, there could be no other name but the “Lillian Reba Moses Child Guidance Clinic”.

Reba’s generous spirit encompassed all that she met.  For those of us who were lucky enough to be in the room last May at CHC’s 40th anniversary celebration, we felt that generosity as she took the microphone and blessed each one of us, while also exhorting us to work harder and better because the need is great.  Though Lupus had taken the strength from her body, her voice and her spirit did not falter.  Neither should we.

Reba leaves a legacy of caring that stretches from her childhood in Florence, South Carolina, to decades of mothering children, some her own and some not, to a vital career as a community activist in the 1960’s and ’70’s, and to a lifetime of dedication to her church.  Common sense, compassion, friendship and inspiration – Reba has given all these things to those around her.   Since she has been ill for many years, I know that many of you never got to meet her, but I wanted you to know of her passing and that we carry on her vision in our work every day.