It can be hard to acknowledge why exactly we get a three day weekend around the time of Memorial Day. Summer is right at our fingertips, beach trips and Barbeques are on the agenda, and getting a Monday off from work is always a nice treat…but that’s not the most important thing about the last Monday in May year after year. I had the privilege to be in Middletown for this year’s Memorial Day parade and I felt like it was the first time in a long time, that I had the chance to actually celebrate the real purpose of this annual holiday. This year also marked the 25th anniversary of The Community Health Center’s participation in the parade.

Memorial Day is a Federal holiday observed annually in the United States and is a day of remembering the men and women who died while serving in the Armed Forces. Formerly known as Decoration Day, it originated after the Civil War to commemorate the Union soldiers who died in the war. By the 20th century Memorial Day had been extended to honor all Americans who have died in all wars. It typically marks the start of the summer vacation season, while Labor Day marks its end. Some common acts people take part in on this day are visiting cemeteries and memorials to honor the fallen men and women of our military services, placing an American flag on each grave in national cemeteries to commemorate what they sacrificed for our freedom, and the most popular act of attending and marching in parades throughout the country.

Yesterday a group of AmeriCorps members marched alongside Mark and Margaret, Dr. Manohar, Peter Gillies, and Apryl Watford, a veteran who works here at CHC. The float was constructed by our wonderful facilities staff and Art Trowbridge towed the float behind his truck, which would have never happened so smoothly without him! We were blessed with gorgeous weather and Main Street in Middletown was overflowing with spectators who seemed to be filled with excitement. This year, the parade honored Female Veterans and the float that CHC constructed for the parade had some emotional images of women in uniform that definitely depicted the theme well. I am proud to announce that CHC won the Council of Veterans trophy for our float, although the overall feeling of honor and pride throughout the entire parade was enough to make everyone happy with the final outcome. It was amazing to not only witness the many veterans that were honored yesterday, but also to see so many young children smiling and waving flags in honor of the brave men and women who have made the ultimate sacrifice. 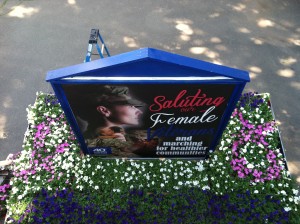